Home » Good News for Caregivers of Elderly and Disabled in Vermont 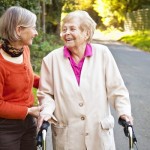 Last week, those caregivers of elderly and disabled people were informed they are now eligible for minimum wage and overtime protections. For many, it’s been a long time coming. The Obama Administration made the announcement that it had approved the new rule so that home care workers were paid at least minimum wage – though the services they provide are invaluable for those on the receiving end.

This is the first time the law’s been updated since the mid 1970s. That law regarded those healthcare providers as companions or babysitters and therefore , weren’t eligible for the same protections. As a result, rights given to other workers in the country were never granted to these types of workers.

New Day for Caregivers of Elderly and Disabled in Vermont

That’s all changed. “For almost 40 years, direct care workers have been denied basic employment rights,” said U.S. Secretary of Labor Thomas Perez. “A fair wage will further stabilize and professionalize this critical line of work, which of course will lead to better quality care.” He then went on to explain, “This rule will present a win-win solution for both home care workers and the people for whom they are caring.”

This will affect more than 2 million Americans, many of whom are caregivers of elderly and half of which must turn to public assistance programs such as food stamps and Medicaid just to make ends meet. Those who are passionate about doing good say it was never about the money, but that they needed to be able to earn a fair living. We can look for the new rule to be published in the next Federal Register, just weeks away from its October publication. Unfortunately (and there’s always a “but”), the laws don’t take effect until January 1, 2015, according to those with details. The rules, those insiders explained, have historically been put into place within 60 days of passage; however, this extended delay allows for states, families and other stakeholders an adjustment period.

The good news, of course, is that for many senior citizens, and others on Medicaid or disability, quality home health care will now be provided by those caregivers who feel as though they’re finally earning -at least to some degree – what is an honest wage for an honest (and noble, might we add) service that directly affects some of our most vulnerable citizens.

Currently, the federal minimum wage is $7.25 per hour and those home care workers must be paid that as well as time and a half when they work more than 40 hours per week. This is applicable to home care workers employed by agencies or other third-parties as well as those who perform medically-related services that require training. There’s another catch: for those workers who provide protection or friendship, such as those who keep someone company, they aren’t afforded the protections.

The Labor Department says it’s a move that’s important and crucial to ensure quality care. It’s not without its critics, though. Some disability advocacy groups say the changes could mean compromises for those with disabilities and on Medicaid, especially if the caregivers are family members.

“We’re very concerned that this will mess with the continuity of care,” said Kelly Buckland, executive director of the National Council on Independent Living. “Medicaid isn’t going to pay for overtime. That’s going to mean people will have to bring a stranger into their house.”

That’s not necessarily a concern for others; Henry Claypool of the American Association of People With Disabilities, says that these new requirements will actually eliminate the Medicaid “institutional bias” by giving in-home care workers the same protections of those who in similar settings, stating, “it’s really just a simple matter of fairness.”